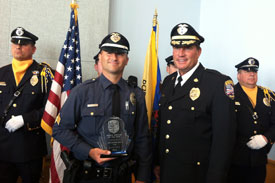 The awards are named in honor of DRPA Corporal Christopher Milito, who died in the line of duty in 2010.

“Last year, the recipients of the 2013 Milito Awards have saved dozens of lives and protected millions of dollars’ worth of public and private property,” said CEO John J. Matheussen.

“Our officers work in two states, dozens of municipalities – including one of the largest cities in the United States – and usually more than 150 feet above the Delaware River,” Matheussen said.  “They risk their lives every day to protect public safety and property, and we’re deeply grateful for their service.”

Sergeant Michael Voll was selected as the 2013 DRPA Police Officer of the Year for his leadership, work ethic, academic attainments and consistently superior professional performance. 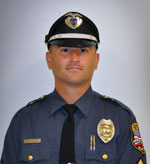 Voll, 34, of Franklin Township, N.J., began his career at the DRPA in 2000 after completing basic training at the Camden County Police Academy.  He was recognized at the academy for having the highest academic average in his class.

During his career in the DRPA police department, Voll has worked in a number of specialized law enforcement details, including the Crime Prevention Unit, the Drug and Alcohol Awareness Unit, the Bike Patrol Unit, the Emergency Response Team and the Crash Investigation Team.  He is also a certified emergency medical technician (EMT).

Voll has earned several letters of commendation and a merit awards at the DPRA.  The department named him “Police Officer of the Month” in August 2003.

Other awards, commendations and recipients:

Awards for Heroism were accepted by Lieutenant Edward Cobbs, Corporal Peter Lawlor, Officer Joseph Hogan and Officer Michael Jordan for pulling a 175-pound man to safety 150-feet above the Delaware River. The man had been attempting to end his life on the afternoon of Feb. 18, 2012 by jumping off the south side of the Ben Franklin Bridge.

Awards for Bravery were accepted by Officer Joseph Graziano and Officer Kenneth Blosser for identifying, running down (on foot) and arresting an armed suspect in Camden on April 28, 2012.

###
The Delaware River Port Authority is a regional transportation agency that connects millions of people and businesses in Pennsylvania and New Jersey.  The DRPA owns and operates the PATCO commuter rail line and the Benjamin Franklin, Walt Whitman, Commodore Barry and Betsy Ross toll bridges.  The DRPA also owns the RiverLink Ferry.  For more information, please visit our website: www.drpa.org or follow us on Twitter: @DRPA_PaandNJ.