INSIDE DRPA & PATCO:
What Does It Take To Remove a 34,000-Pound Structure From An Iconic Bridge?

Question: How do you safely remove a massive overhead sign from the region’s busiest bridge?

The answer, which includes a lot of planning and careful execution, sounds easy enough, but it’s much more complicated.

In the early morning hours of August 12, 2020, crews removed an approximately 34,000 pound gantry from the Walt Whitman Bridge. The gantry is original to the bridge, which opened to traffic in 1957. 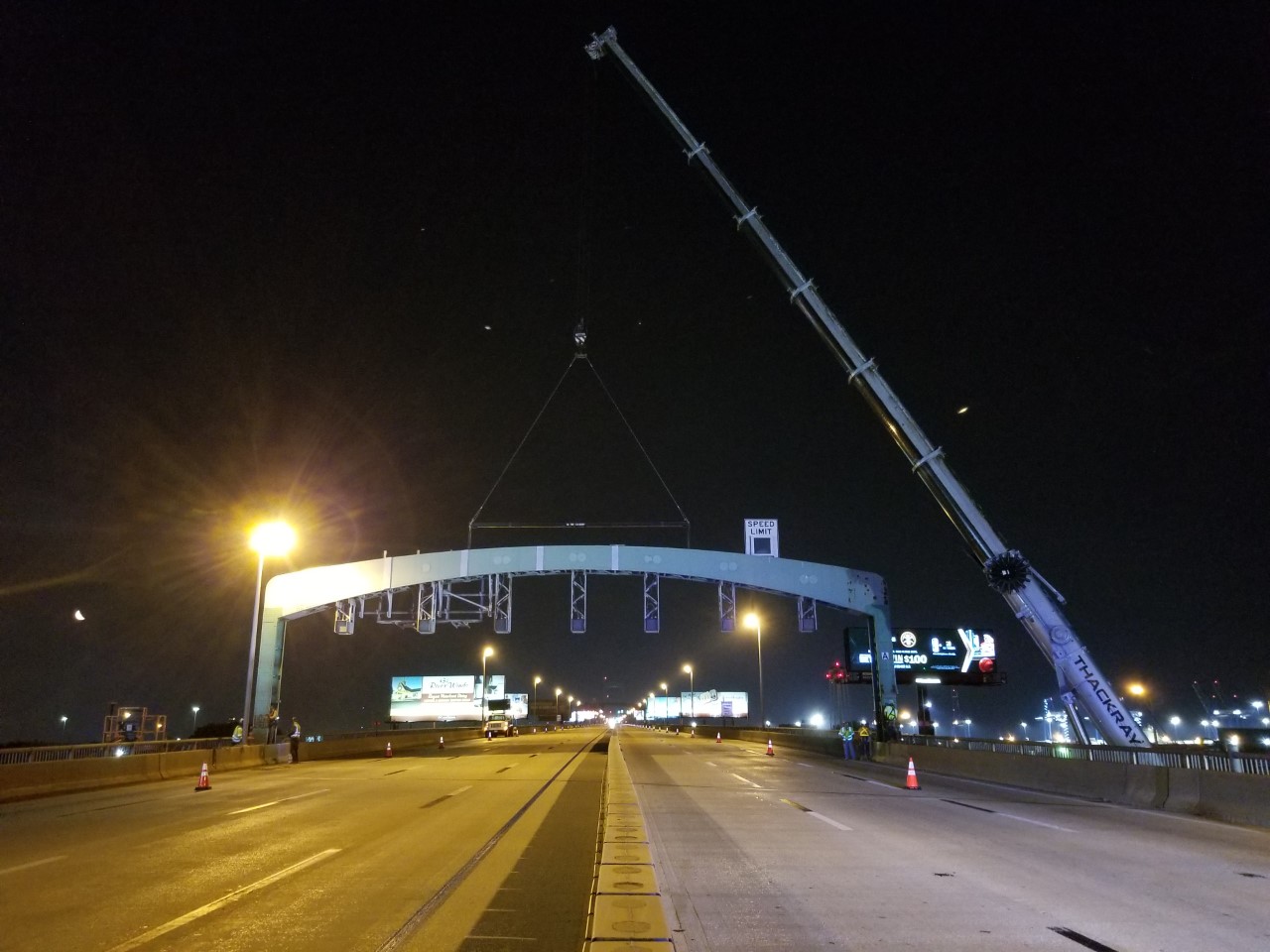 However, weeks before its removal, the pre-planning was in full swing to pull off such a large task. Originally, the plan called for the complete closure of the Walt Whitman Bridge from 11 p.m.-5 a.m. That plan changed when it was determined that preparation work could take place ahead of the removal, which would reduce the time required to remove the structure.

By being able to perform the preparation work in advance, the need to close the bridge was reduced from six hours to three 20-minute closures.

During the two weeks leading up to the removal, the contractor removed signs from the structure and replaced rivets with high-strength bolts, which could quickly be unfastened when the bridge was closed during a 20-minute closure.

The gantry had reached the end of its useful life and needed to be replaced due to its age and increased maintenance and repairs. One of the main functions of the gantry is to provide information to motorists in the form of signs for exits and speed limits, as well as lane indicator lights, which alert motorists traveling on the bridge which lanes are open and which lanes are closed. 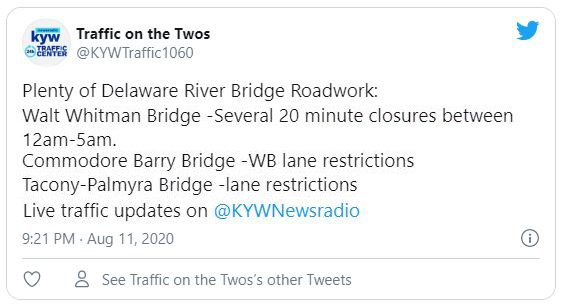 Leading up to the removal of the gantry, DRPA’s Communications Department launched efforts to get the word out to the public regarding the intermittent closures. PennDOT and NJDOT were notified to run messaging about the intermittent closures on the bridge on variable messaging signs (VMS) on roadways leading up to the bridge for a few days in advance. In addition, the media was advised and social media posts, as well as travel text alerts, were issued.

The contractor worked with Public Safety ahead of the closure in order to remove signs, disconnect power and communication lines on the structure. Shortly before the closure, DRPA engineers coordinated with Public Safety to have vehicles in position to halt traffic. As soon as traffic stopped, crews removed the temporary bolts and a 500-ton crane with a 197 foot reach lifted the gantry off the bridge and placed it on the ground next to the bridge. After the gantry was removed from the bridge, traffic was reopened.

Although not fun for workers, the early morning timeframe for the removal of the gantry was selected in order to impact the least amount of motorists.

This operation will be performed once again to remove another gantry from the bridge in the early morning hours of August 19, 2020. 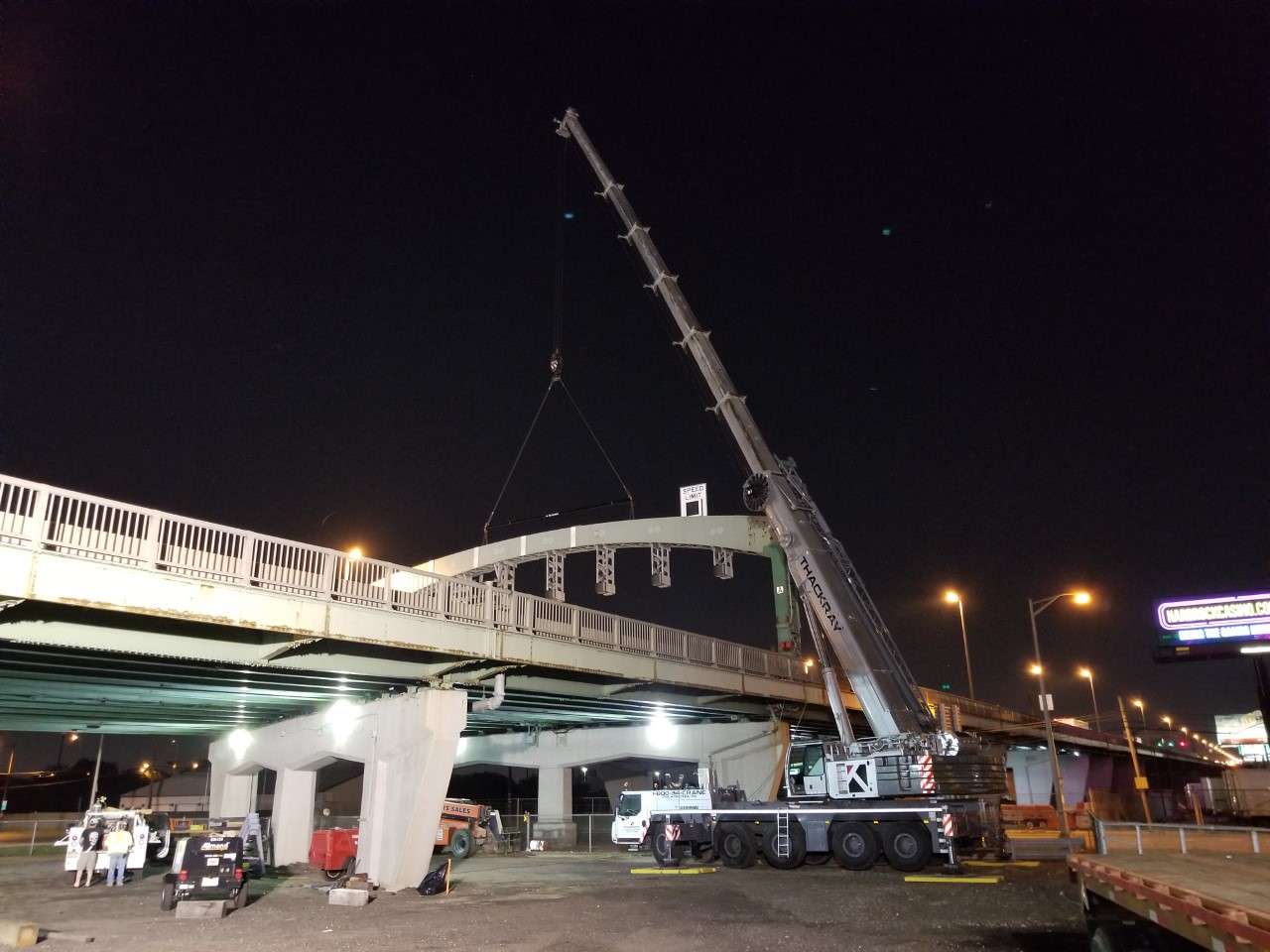 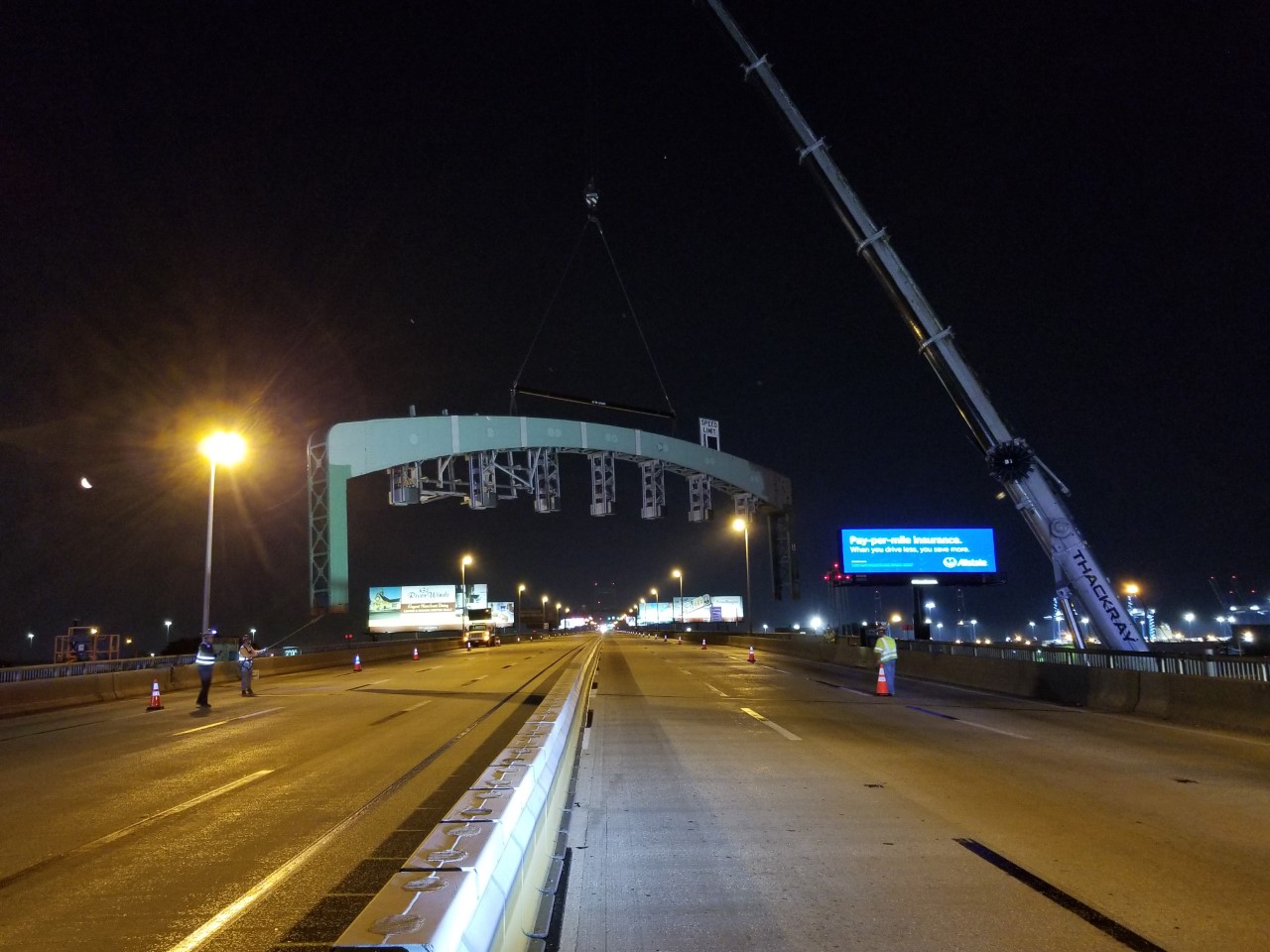 Crews begin the process of removing the gantry from the bridge 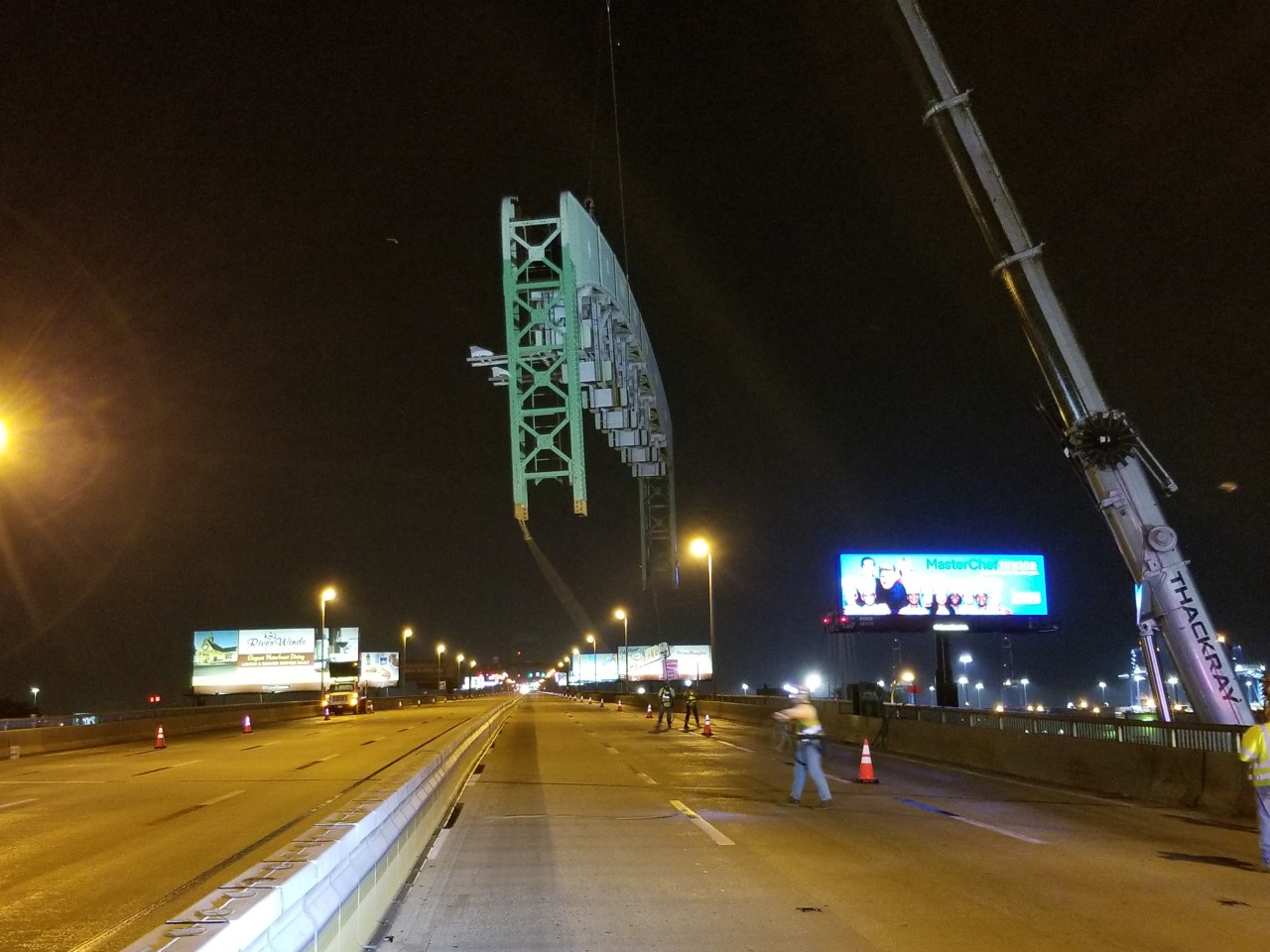 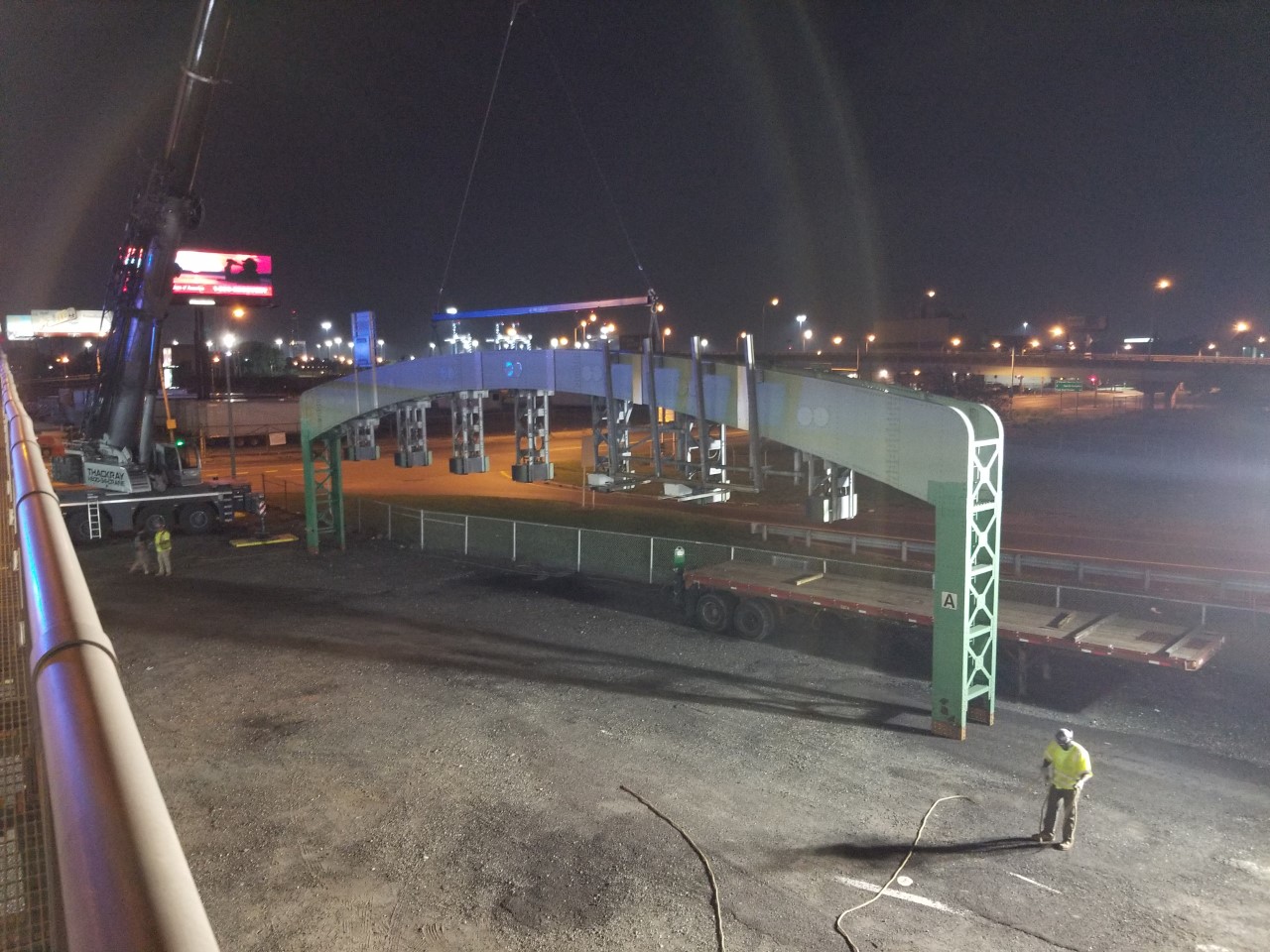 The gantry is removed from the bridge safely